I’m putting my English teacher hat on today, one of my favorite things as a writing coach and editor.

Certain errors can make your writing look amateurish and unprofessional.

Here are a few common errors to avoid.

Incorrect: We’re heading to the mountains this weekend, we’re hoping to ski.

Correct:  We’re heading to the mountains this weekend. We’re hoping to ski.

Correct: We’re heading to the mountains this weekend, and we’re hoping to ski.

Now notice the punctuation in the following sentence:

We’re heading to the mountains this weekend and are hoping to ski.

This is also correct. When you take out the “we’re” in the second part of the sentence, you no longer need the comma.

So and so that

So is a coordinating conjunction, so when you use it to join two sentences, you need to use a comma.

Correct: We want to get a good seat, so we need to leave early.

But when you use so in the sense of so that, you do NOT need a comma.

Incorrect: We’re leaving early, so that we can get a good seat.

A long time ago, some of us (yep, that’s me) learned to use a double space after a period. That’s no longer the standard. Now, the standard is a single space.

The good new is that you don’t have to manually fix that error. You can use Word’s Replace function. In the dialogue box:

Replace with: type a single space

And then replace all. Voila!

After you’ve written your rough draft, be sure to do some revising and/or editing to correct mistakes like these.

Next Step Coaching Services will be having a devotion writing contest, and we’ll be announcing the contest rules mid July. For just $11.99, you can purchase my  How to Write a Devotion Workbook. This workbook will serve as a guide for the structure we’ll expect for our devotion contest entries.

I’ve been talking to writers about overcoming doubt in the writing process. Every writer, no matter how new or experienced, feels doubt at some point when writing. I think it helps to know we’re not alone in this! And we can learn from others how to overcome that doubt. Today I’m welcoming my friend, Angie… 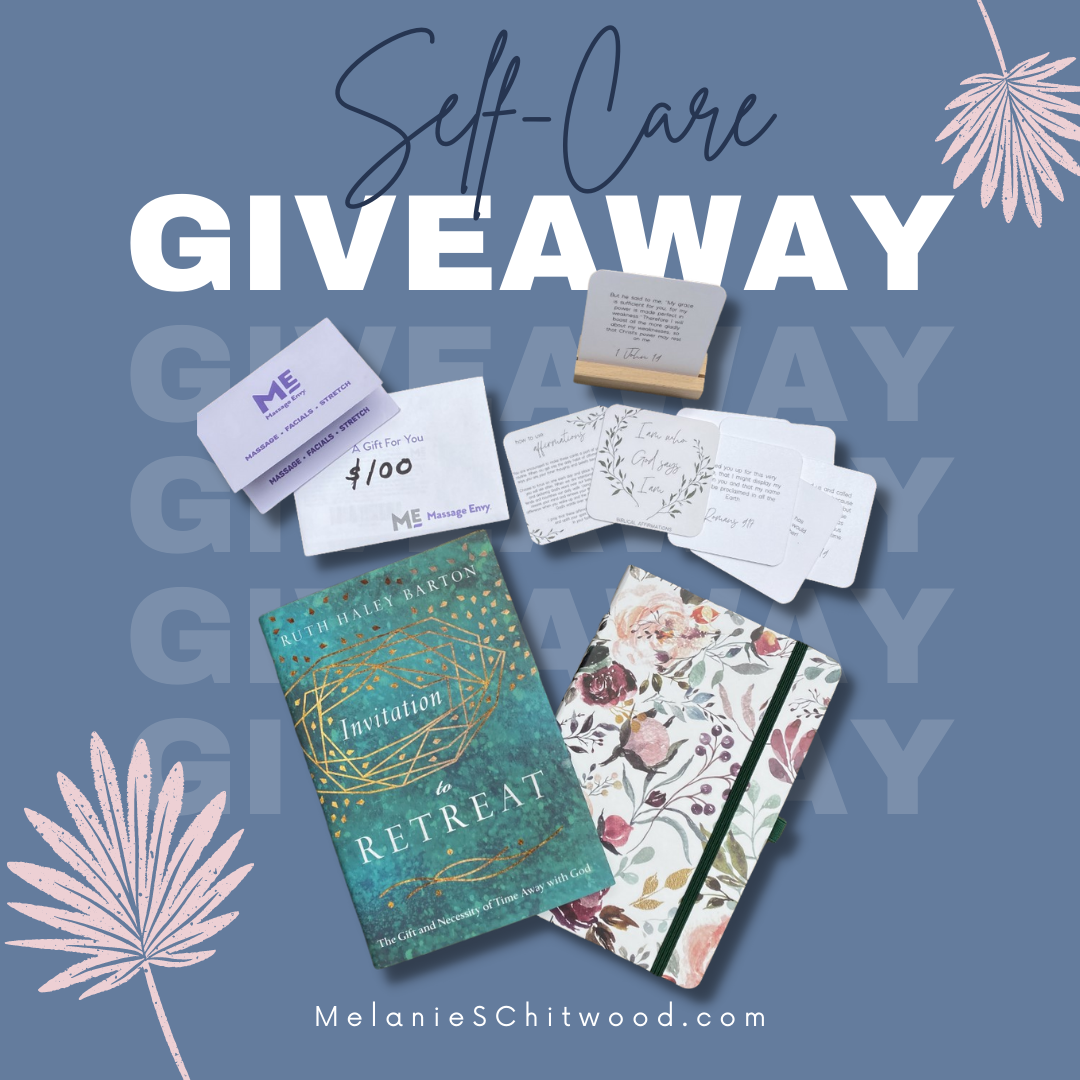 I want to give you a gift! One that will make you feel loved, treasured, and refreshed. One to allow you to take good care of yourself by practicing biblical self-care. But first let me explain a little behind my passion about biblical self-care. I imagine most of us can say we’ve had a time… 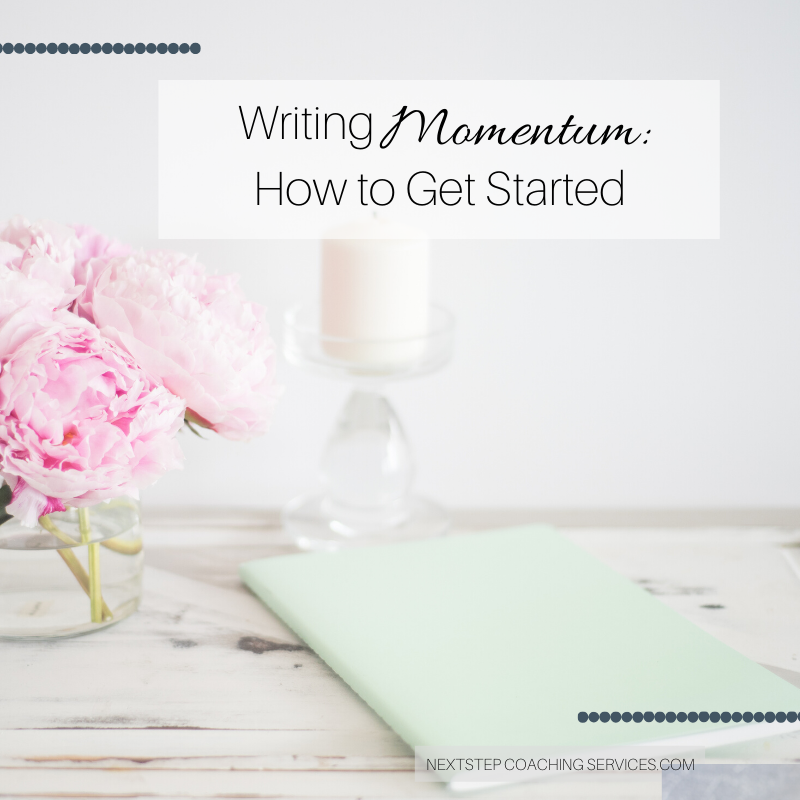 You’ve landed on a topic. Now how do you gather momentum for starting your writing? These are my tried-and-true starting points. Prayer I pray for the Holy Spirit to bring me verses, insights, conversations, people, books or podcasts on my topic. I love to see what God brings my way. Just yesterday at Bible study… 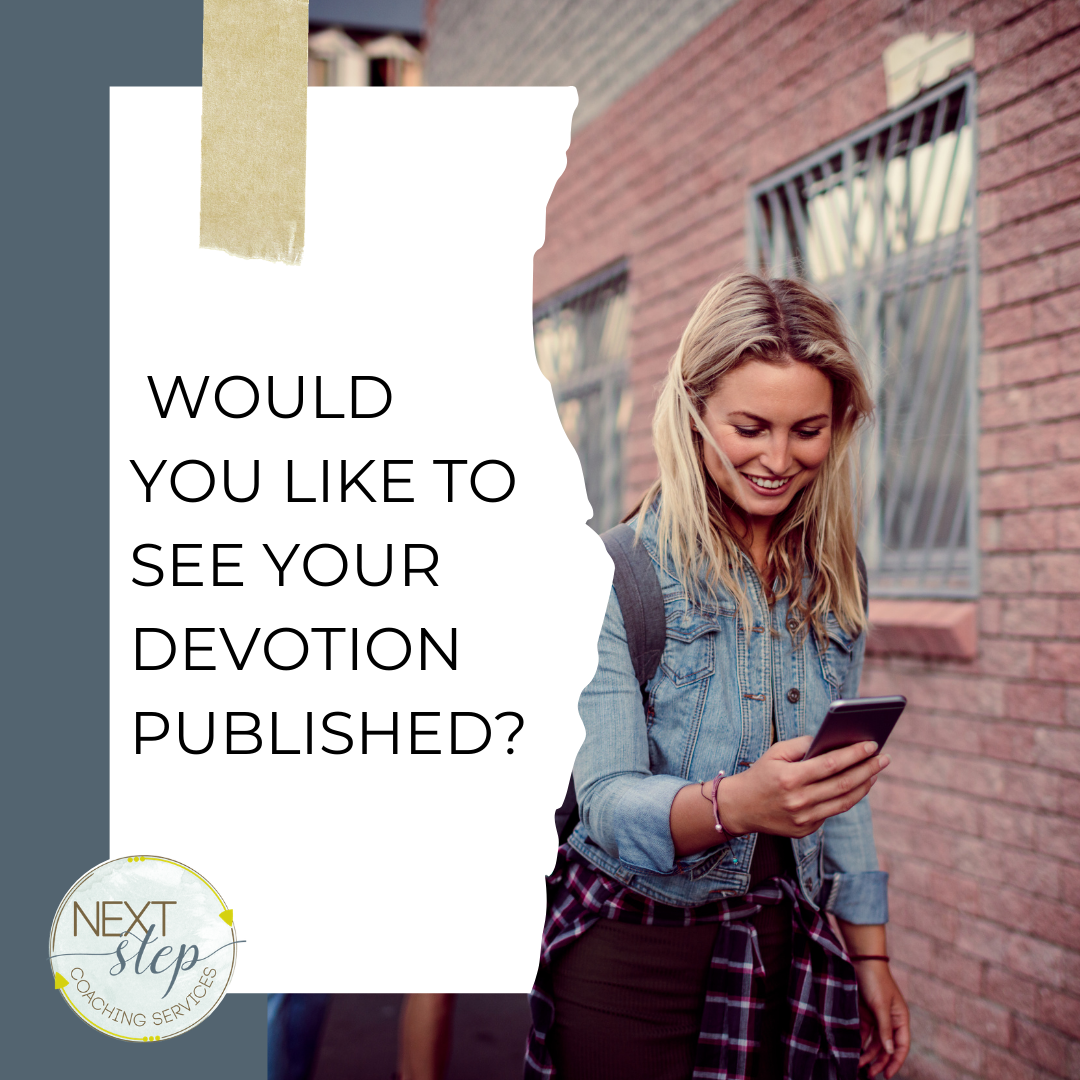 There’s nothing like the thrill of seeing your writing published! Devotion writing is a great way to dip your toe in the publishing world. Last year we held our first Next Step Coaching Services Devotion Writing Contest, and we’ll hold our second in a week. We’ll announce all the contest details next week! In the… 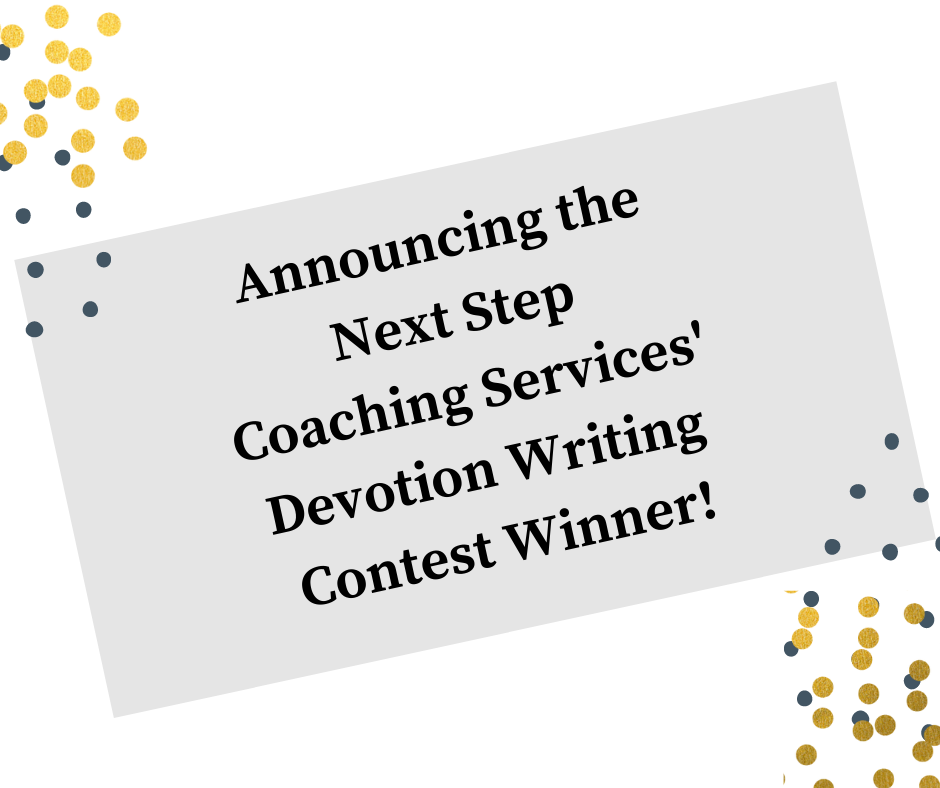 After reading many fantastic devotions, our judges have chosen a winner of the Next Step Coaching Services’ Devotion Contest. Congratulations to Leslie McLeod! Our judges lauded her devotion’s format, biblical foundation, relatable tone, and especially her creative wording. Enjoy reading! Setting Your Hopes Free “Return to your stronghold, O prisoners of hope; today I declare that I…